Sorry for not posting lately. I have been busy with a number of projects including posting on Johans Beach and Dive Resorts facebook page and creating a new website for them. 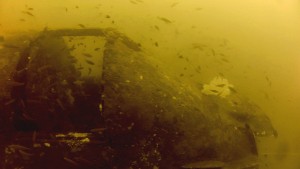 Also, have been doing some research. Johan has found a Skyraider aircraft and I been researching possible aircraft. I have two prime possibilities both are Ad-5Q aircraft. The AD-5Q is a modified Ad-5N changed to perform Electronic Counter Measures (ECM) missions.

The Skyraider is best known as a single seater single engine propeller driven attack aircraft. Designed at the end of WWII they saw duty in the Korean War. They are probably best known as Sandy to Vietnam Vets. The Sandy was used for close air support and as protection for search and rescue missions. Unlike the new fancy jets, the Skyraiders could stay with the helicopters and could stay on target for hours. They could be loaded with a mixture of bombs and had 4 20mm cannons. They could keep a landing zone safe for the recoveries. 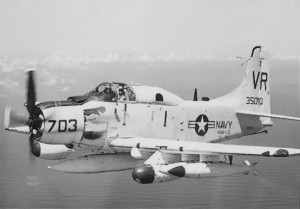 Similar to the aircraft that has been found

Research has led me to a AD-5Q crashing into Subic Bay on Jan 9 1962. The aircraft belong to VAW-13 detachment Foxtrot, which was on temporary duty with the USS Lexington. The crew of four died in the crash. Another crash in 1966 was a AD-5Q belonging to VAW-13 det 1. The crew of that aircraft escaped with no injuries.

This week we plan on visiting the aircraft looking for it data plate and the marking on the stabilizer. This information will allow us to fully identify the aircraft. It also means there is one more to look for.