A Wasted Day — At Sea on the Norwegian Epic 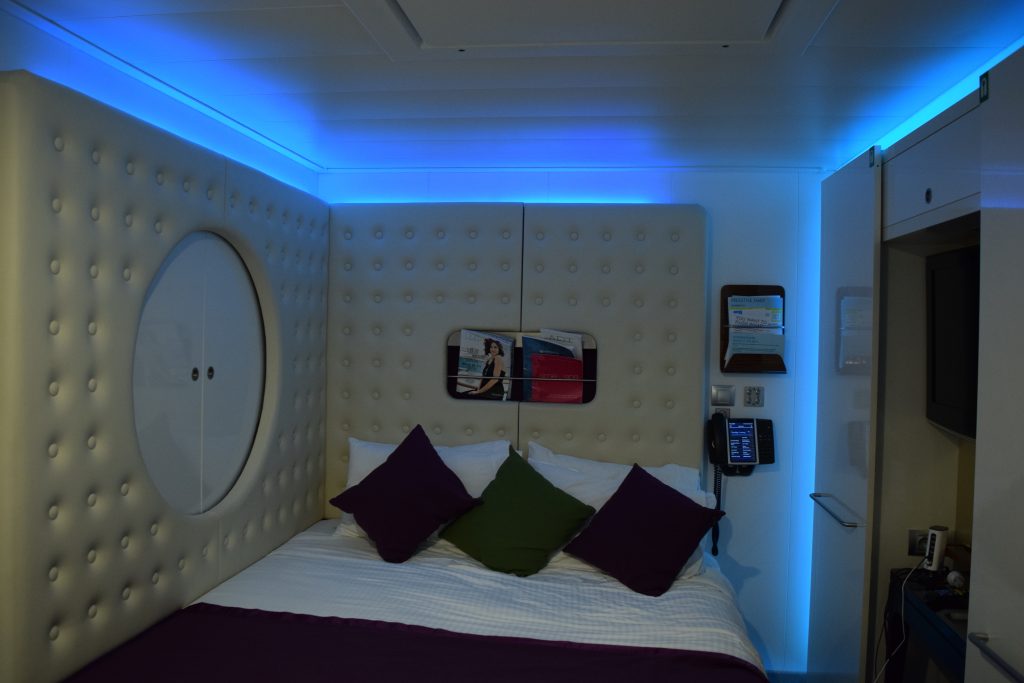 Studio Cabin on the Norwegian Epic

I guess I just wasted a vacation day here aboard the Norwegian Epic. Today (Tuesday) was a day at sea. The early morning hours the sea was a little rough and you could feel a little movement that kept me from falling right to sleep. I woke super early, it was just before 9am. I put on the changing mood lights and read for a while. Got up and showered around 9:40, then walked up two decks to the fitness center on deck 14. There I had a body composition analysis done. It analyzes your weight and using electrical impedance tells you how much fat you have and where. Also, your water retention. I already knew I was overweight, now I know where.

It was after 11 and I had not eaten, so it was off to get something. I really did not feel like eating breakfast so I skipped the buffet at the Garden Terrace and headed down to deck 6 for O’Sheehan’s. O’Sheehan’s is set up as an Irish pub and starts serving lunch at 11. It is also one of Norwegian Epic’s included restaurants. The Norwegian Epic has a number of different dining options, some are included in your fare, while some are extra.  I just ate lightly, having a grilled chicken sandwich. After my snack, I walked up to deck 15 and enjoyed the fresh air as I walked around the deck.

So around 1:20 pm, I head on down to the casino to enter the daily blackjack tournament. I wore the “I Got Lucky” t-shirt I won last year at another NCL blackjack tournament. On the Epic they run their contest differently. They run separate tournaments that start and finish the same day. On the Getaway, the top 7 money winners in the elimination rounds went to the final held the last day of the cruise. 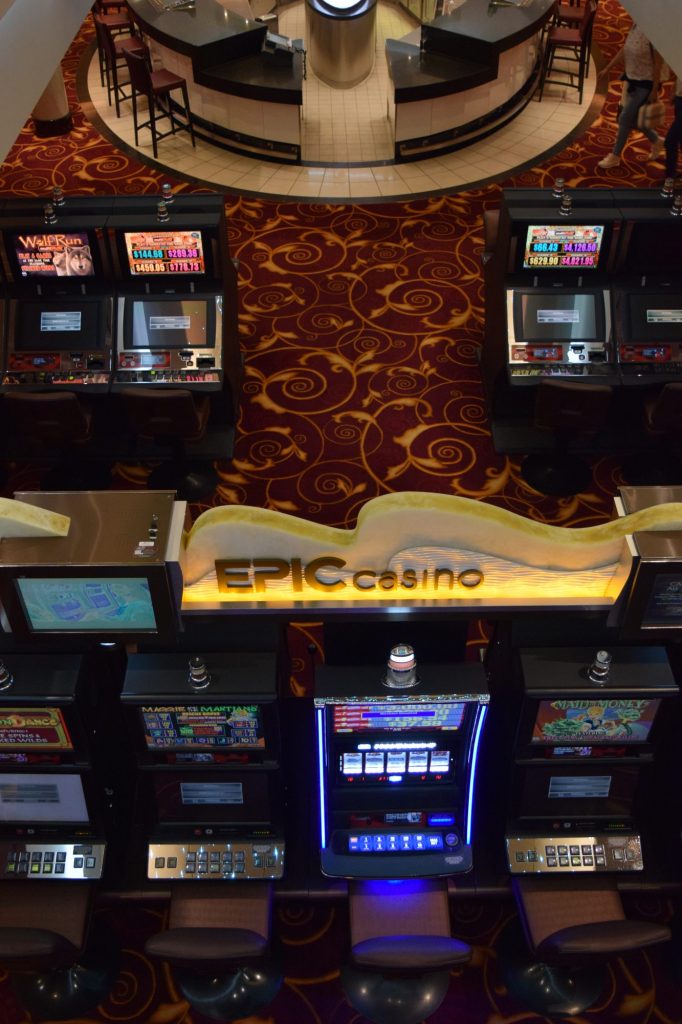 On the Epic, the winner of each elimination moves to the final. In the first elimination round, I did okay but was not the top player. I did much better in the second elimination.

Going into the final hand I was second in money, but I was first to bet. I bet large but held back some chips. This forced the others to bet large as well. I drew low cards and had to keep hitting. I got a 21 in five cards, so even if the dealer got a 21, I still win. Everyone else either busted or was beaten by the dealers 20. I won the elimination round. Since there were only two elimination rounds, there were only two of us in the final. I only bet a little in the first hand and got my only blackjack.

It seems that me and the other player were close in our winning in the first three hands. However, in the fourth of the seven hands the other guy bet all he had and lost. I just had to play out the remaining hands. I won the contest, got another t-shirt and a small cash prize.

Since the Garden Cafe was still serving lunch, I went up and got some fresh pasta. They have a pasta station where they cook it to order. Fresh pasta only takes three minutes to cook. As the pasta cooks, they prepare your sauce. 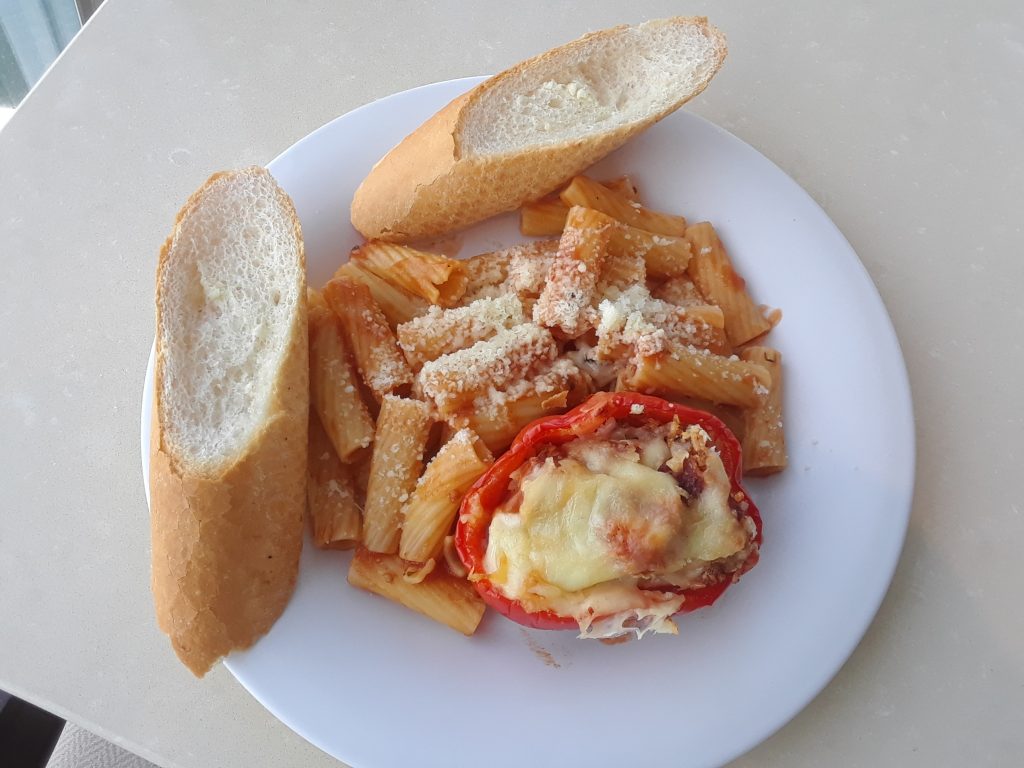 Fresh Pasta and a Stuff Pepper

After my pasta, I went back to the studio stateroom and read for a while. Around 4 pm, it was back to the fitness center for 45 minutes on a reclining stationary bike. Then next door for the Thermal Spa.

Chill in the Heat

When I was on the Norwegian Getaway last year, I tried the thermal spa and liked it. So I made sure I purchased a pass when I booked my cruise. The pass is good for the whole cruise. This is an adult only spa with saunas, steam rooms, hot tubs and lounge areas. This one is set up a little different as the steam rooms are not coed like they were on the Getaway. It does not have the salt spa either that the Getaway did. However, there are two large saunas with unbelievable ocean views. Also, they have a balcony that overlooks the stern.

I spent about an hour in and out of the sauna followed by some time in the lounge. I selected one of the tiled lounge chairs. They are heated and really helps you to relax. From my chair, I could see out the glass wall that separates the balcony from the lounge. We were traveling east, so the view was to the west and the sunset. It was the most magnificent sunset I have experienced in years. The colors were all so vivid and alive. I though about going to get my camera, but did not want to take the time to change. After the sunset, I changed and went back to the stateroom to change for dinner. 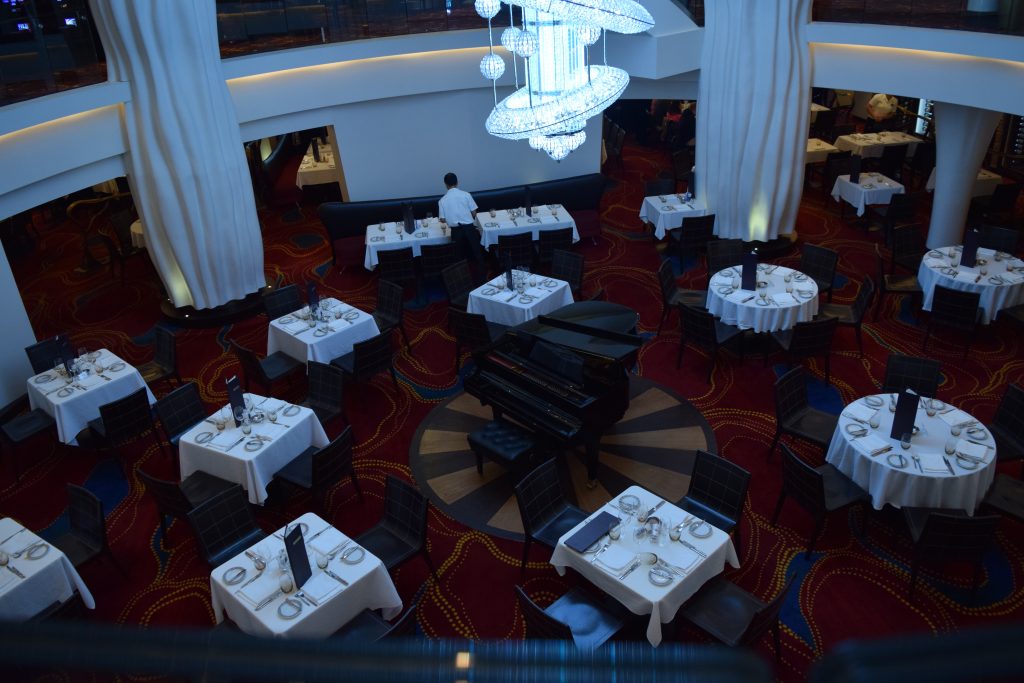 I went to the Manhattan Club Restaurant. It is modeled after a New York Supper Club with live music. However, it is one of the complementary restaurants onboard. I started with a chicken Cesar salad I had planned on getting a steak, however, I “settled” on the rack of lamb instead. Desert was a chocolate lava cake with a strawberry compost. 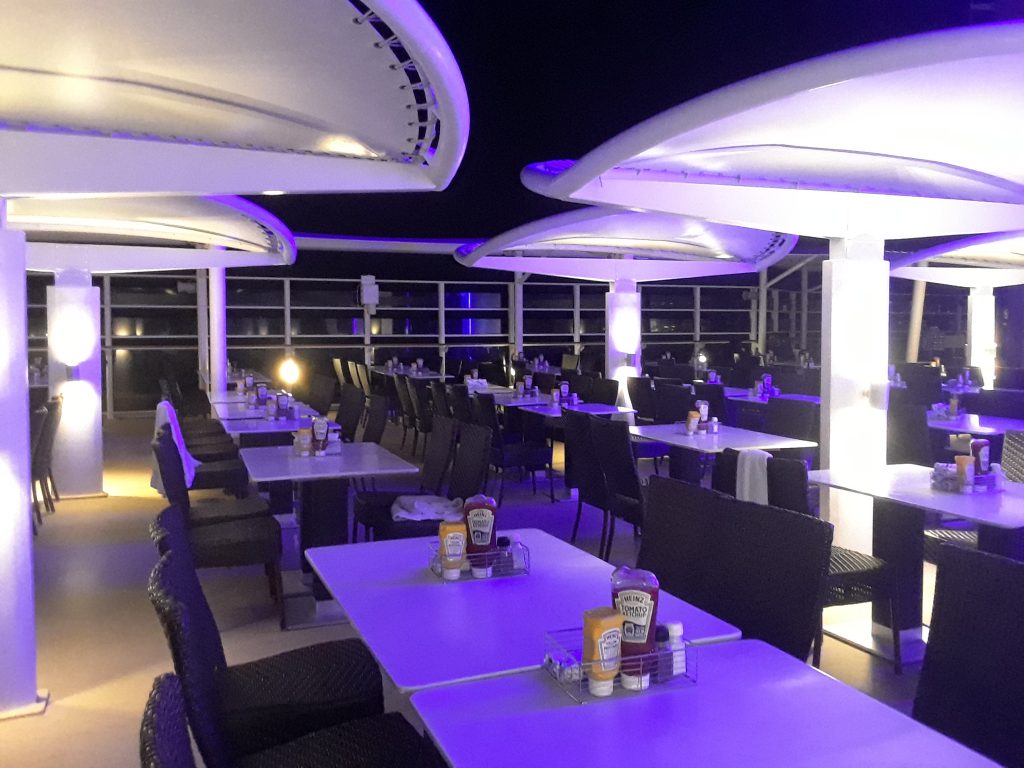 I had some time to waste, so I went up on the top deck and relaxed under the stars. Around 9:30 was the show “Priscilla: Queen of the Desert”. It is a Broadway musical play about three drag queens in Australia. It was very good lasting about an hour and a half. 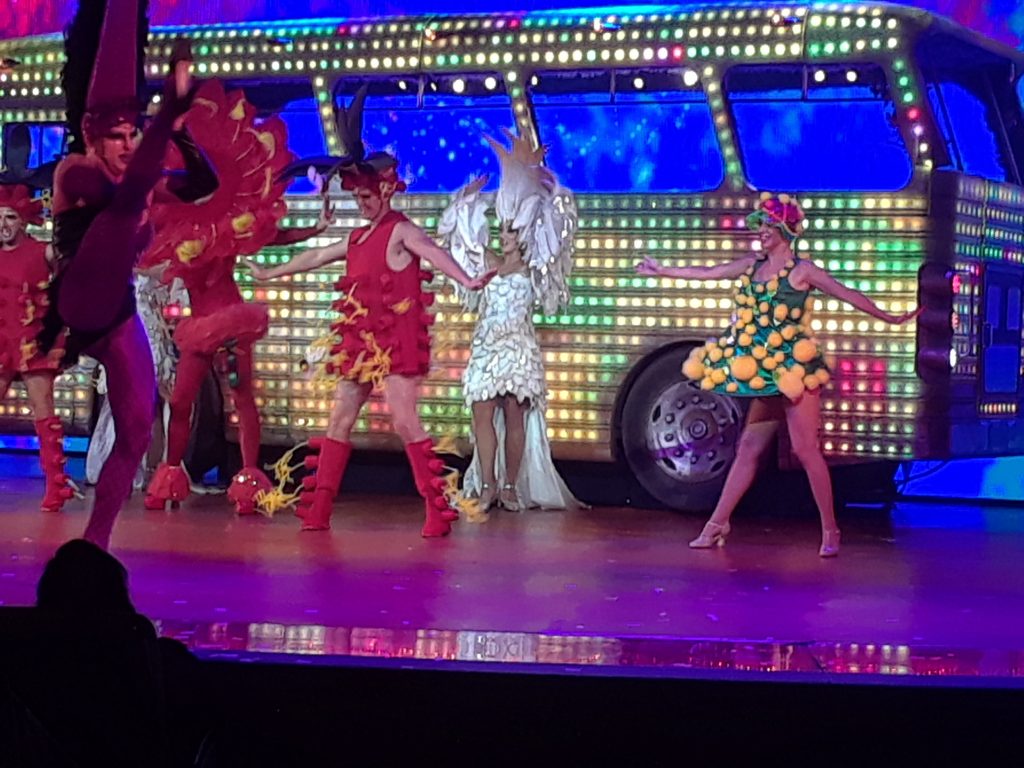 Priscilla: Queen of the Desert Show

Priscilla: Queen of the Desert Review

The Show, Priscilla, Queen of the Desert, is a musical with a book by Australian film director-writer Stephan Elliott and Allan Scott, using well-known pop songs as its score. Adapted from Elliott’s 1994 film The Adventures of Priscilla, Queen of the Desert, the musical tells the story of two drag queens and a transgender woman, who contract to perform a drag show at a resort in Alice Springs, a resort town in the remote Australian desert. As they head west from Sydney aboard their lavender bus, Priscilla, the three friends come to the forefront of a comedy of errors, encountering a number of strange characters, as well as incidents of homophobia, while widening comfort zones and finding new horizons.

Norwegian Cruise lines adapted a shorter version that premiered on the Norwegian epic in October 2015. This version last about an hour and a half and I found it very good. I am including a short video clip as part of this review so you can get a feel for the performance and the presentation. I will admit, I was not very excited about the story line when I first heard what it was but decided to go anyway since I had made the reservations and it was a sold out show. There is no extra charge for this show but seating is limited and the show is done only twice during the weeks sailing.

The story line was interesting and I felt that it was a true representation of the times that the three main characters where experiencing. The musical abilities of the singers were outstanding and the acting portion was equally good. Some of the backdrops and props were a little corny, but have to give them some lead way since it is a stage production.

That is one Day

That was basically my day at sea. I bypassed most of the planned activities on-board and just planned my own day. I will present some other post in the next few days talking about the ports that i did visit.